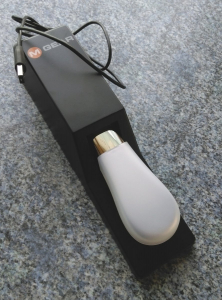 In everyday journalistic life, transcribing is often unavoidable, i.e. transcribing interviews or articles in a foreign language into German for translation. The problem is that our fingers on the keyboard are hardly as fast as a normal speaker. I have always wished for a foot switch with which I could start and stop a media player on the PC with the recording of the interview. In fact, there are such devices, mostly from the big office equipment suppliers like Olympus or Tascam. They are plugged into a USB port and send keyboard commands to the respective program. Such footswitches are then in the price regions clearly above 100 euros. That must be cheaper. It does, too. If you are familiar with single board computers like the Arduino or Leonardo and can solder something. Or you know someone who can. Time requirement: approx. half an hour, costs 30 euros, depending on beauty and comfort.

What you will need:

as it is available in music shops for electric pianos. No sustain pedal with hold function, only a simple switch is allowed. You can hear that it clicks when you press it. Or not. If it is a inexpensive it has a switch. An investment of less than 20 Euro is enough. If you want it more beautiful and comfortable, you can also invest a little more. In addition, maybe some thin two-pole cable between Arduino and foot pedal switch. Cut off the plug, the cable goes directly to the Arduino. There is enough space inside the pedal to place the tiny Arduino Micro in the pedal case. 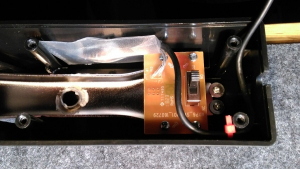 But only the versions based on the ATmega32U4 CPU will work. These are for example Arduino Micro or some boards from the series Teensy. Only these boards have a USB interface, which is directly attached to the CPU, so that the board can behave as a USB keyboard or USB mouse towards a PC. With Arduino Nano or Uno it also works, but then you have to build new firmware. Since the Arduino Micro is already available for less than 10 Euro, it is completely sufficient, the version without soldered pins is optimal. The teensies work the same way, but are harder to get and much more expensive.

This replaces the original cable from the pedal.

Think of strain relief of the cables and protection for the Arduino. The switch is soldered via a short cable to ground and digital input #4. That’s it on hardware. Some software is still missing. First, the fully trivial program for the Arduino, which only scans the switch and sends a space char as keyboard when pressing and releasing. This switches my lightweight and free media player from play to pause and vice versa. The program needs the library Keyboard.h, which is normally pre-installed in the Arduino IDE.

As a media player I use the AIMP player which is for free. The hot keys can be configured as needed. I use a space char to switch between Play and Pause, a KEY_LEFT_ARROW to skip back in the playback for five seconds. The Arduino script scans the switch. If it is pressed for less than 600 milliseconds it send the space char for Play/Pause, if the pedal is pressed for more than 600 milliseconds it sends the code KEY_LEFT_ARROW to go back.

The media player runs on a notebook computer, connected to the switch. Writing takes place in my desktop PC, so I do not have to switch between the windows.